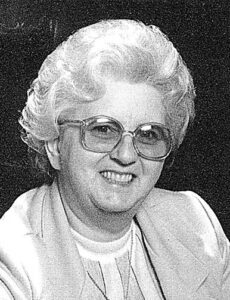 MARGUERITE “MARGE” LINDSZUHN, of St. Charles, 85, our loving mother, aunt, and friend to many, passed away peacefully on Friday, June 10, 2022 at Covenant Healthcare – Cooper in Saginaw. She was diagnosed with Parkinson Disease in 2010 and fought a hard battle. Marguerite was born on November 3, 1936 to Clarence and DeEtta Breton in Saginaw. She graduated from Saginaw High School in 1955 and married William (Jack) Lindszuhn on February 18, 1956. They were married for over 40 years before Jack preceded her in death in 2012. Marguerite worked as an operator at Michigan Bell Telephone until the time she became a full-time mother. She was very active with her children, including being a Den Mother for the boys while in Cub Scouts and guardian of Jobs Daughters with daughter Margaret and many of her friends. Marguerite was also a room mother for school events, which she continued throughout her grandchildren’s school years. She opened her home to everyone, friends, family, and total strangers. Marguerite loved bowling, dancing and had a beautiful singing voice, being a member of the traveling choir in high school. She was a lifelong member of the Michigan Grand Chapter of Order of Eastern Star, Past Matron of Martha Washington #113, life member of Order of the Amaranth, and former Guardian of Jobs Daughters Bethal #45 of St. Charles.