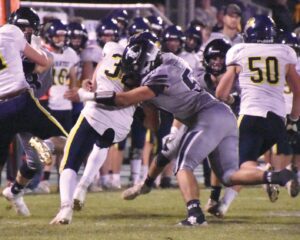 In 2021, the Pirates hosted the Hornets, and knocked them out of the playoffs with a 53-27 defeat. This year, New Lothrop returned the favor.

After a scoreless first quarter, the Hornets found their groove in the second. Quarterback Jack Kulhanek started things off, scoring on an 18-yard run at 11:53 of the second. A pass from Grayson Orr to Alec Wenzlick on the twopoint conversion made it 8-0.

On the third play of the Pirates’ ensuing possession, quarterback Troy Wertman’s pass was intercepted by Orr, who returned it for a touchdown. A failed two-point run by Kulhanek gave the Hornets a 14-0 lead with 10:38 left in the half.

Kulhanek added a nine-yard TD run at 9:02 of the second. With the failed two-point attempt, the score was 20-0. 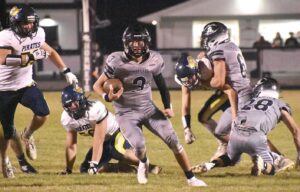 New Lothrop quarterback Jack Kulhanek (3) looks for some running room against the Pewamo-Westphalia defense in the Division 7 district final. Kulhanek ran for 136 yards and two touchdowns in the contest. Photo by Keith Salisbury

At 4:05 of the second, Kulhanek connected with Wenzlick for a 10-yard TD play. Nolan Mulcahy’s two-point run made it 28-0, New Lothrop.

The Pirates finally broke the shutout at 4:28 of the fourth quarter on an eight-yard touchdown pass. The PAT kick made the final 28-7.

The Hornets finished the night with 241 yards rushing and 90 passing for 331 yards of total offense.

Kulhanek powered the Hornet ground attack, picking up 136 yards and two touchdowns on 18 carries. Mulcahy had 56 yards on six attempts. Wenzlick had 24 yards on five carries. Brady Gross had two carries for 19 yards.

Kulhanek was also nine of 20 passing for another 90 yards with a touchdown and an interception. Wenzlick hauled in three of those passes for 33 yards and a touchdown. Nick Barnette had two catches for 27 yards. Kaven Unangst had three catches for 24 yards.

The Hornet defense limited P-W to 121 yards rushing and 54 passing for 175 yards of total offense.

The Hornets were scheduled to host Elkton- Pigeon-Bay Port Laker in the regional final on Friday, Nov. 11. Watch next week’s Citizen for coverage from that game.